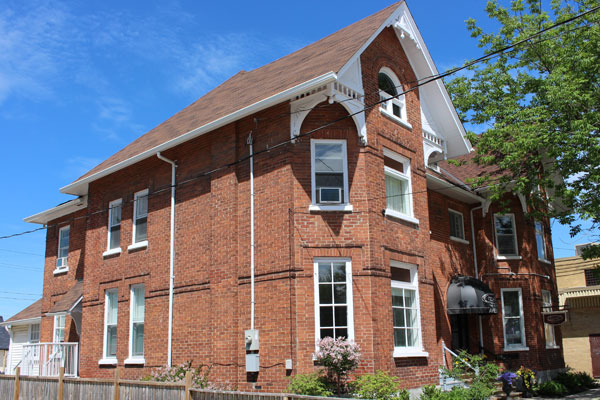 Description – Ground-floor entrances are set well back within broad, round arch with triple voussoirs and hood-moulding. Front doors are period, half-glazed and panelled, behind glazed screens and storm doors, both are period examples having half-glazed, three panel, wooden door, divided side-lights and transom windows. Second floor above contains pair of six-pane casements (no. 222) and wide 1/1 (no. 224), both in flat-arches with hood-mouldings which drop at upper jambs. Small decorative grid of rustic brick is between windows. At central roof, pop-up dormer has single sash with smaller peripheral panes (no. 222, behind metal storms) and screen only (no. 224). At LH and RH sides, full-height, bay windows have local-stone foundations with stepped brick plinth above. At ground-floor, central window is large, single sash (behind period wooden storms) under frosted transom window, with flat-arched and hood-moulding above. Hood-mouldings drop at jambs, to upper course of double peripheral stringcourse. Side windows are tall, 1/1 (most with eight-pane wooden storms) within flat-arches and hood-mouldings as described. At second floor, similar arrangement exists, but with smaller windows (most behind with metal storms), all in flat-arch apertures. Gables have central, round-headed apertures. No. 222 has plain, replacement lunette over bottom sliders, while no. 224 retains thick mullion, dentilled transom, and two lower sashes below lunette. Gable eaves are supported in both directions by large, curved brackets with pendant finials at upper ends, and with band of small spindles above, and upper and lower sunburst motifs. King-post truss and pendant ball finial adorn gable apexes. Roof is clad in brown asphalt singles, and one chimney remaining at north side has minor corbelling at head. 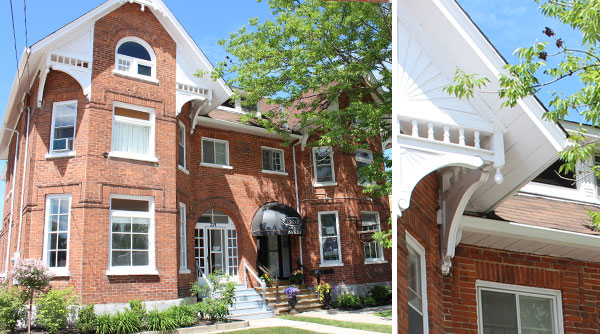 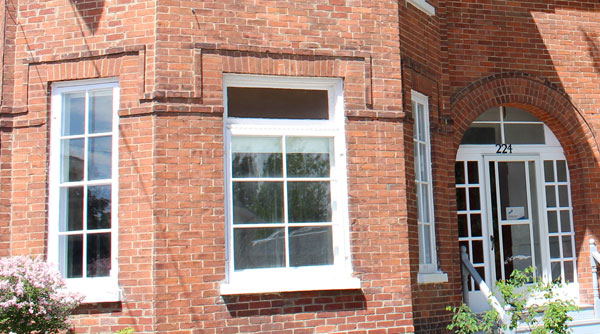