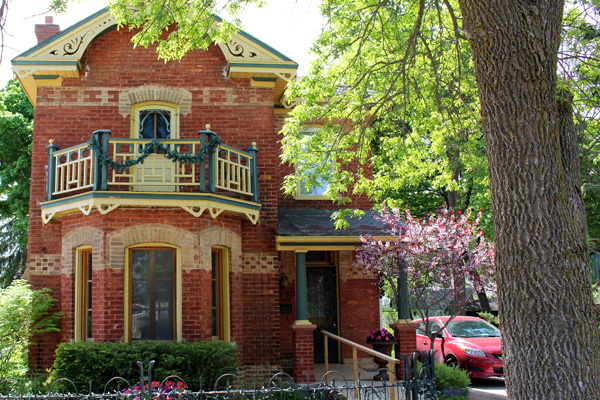 Description – LH projecting block has ground-floor bay window has three, segmental-arched apertures with buff-brick arches dropping six courses at upper jambs. Windows are (replacement) divided-light casements. Five-course-high, flush band-course, of buff brick framing alternating red and buff headers and stretchers, extends around house below window-head height. Flat roof of bay window has small fascia with (replacement?) punctured lobes at corners. Above is small balcony with post-modern, wooden posts and replacement, fret-type railing of Victorian inspiration. Balcony has half-glazed, two-pane, panelled door, with unusual, curved head and top rail, within segmental-arch aperture. Polychrome band-course, as at ground floor, extends around house at voussoir height. Gable trim is crowning feature, with deep bargeboards (in replacement plywood) forming broad, segmental arch, and with cut-out filigree of Celtic inspiration. Delicate finial rises at roof peak, while fascias are narrow and, again, ornamented with punctured lobes at corners. Roof is clad in pale-grey asphalt shingles, with rather odd, decorative, brown shingles in lower pitches and at peak. Ornate red-brick chimney with buff-brick base rises at north elevation, having recessed panel at each side with projecting, central, brick lozenge, and with robust corbelling to three-course-high upper band with two-course cap above.

Chimney at south elevation is new, with corbelled head. RH side of façade is recessed and contains old, half-glazed front door (behind metal storm) under new, pitch-roofed porch with two wooden columns built on thin brick piers with concrete copings. Landing is concrete slab on grade. At second floor above porch is a single, 1/1 window, with arch and band-courses as described. 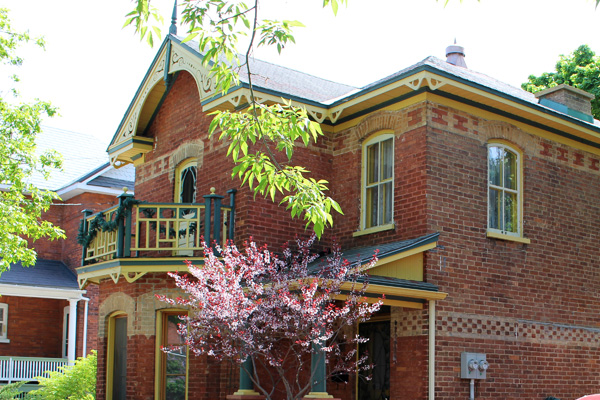 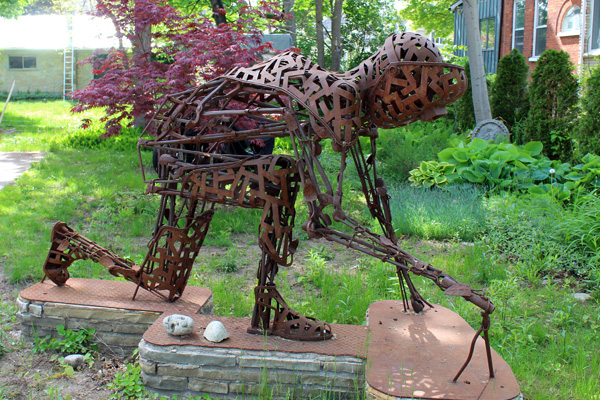 Original artwork honours those who worked in the former Collingwood Shipyards