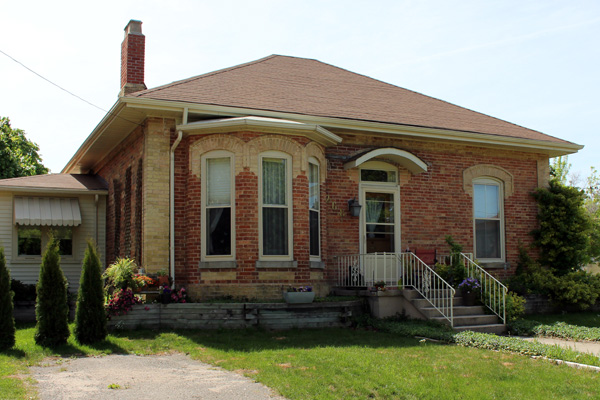 East Elevation – Asymmetrical façade is built off local, squared-rubble foundation and buff-brick plinth with beveled top-course. Wall is built of beige brick, with corner pilasters rising to band-course at eaves, all in buff-brick. Central door, reached by small flight of concrete steps with metal railings, is protected by simple, segmental canopy (witnesses of earlier porch remain). Front door is period, half-glazed, wooden door with lower panels (behind metal screen door). Transom window, hidden by small metal storm, remains within segmental-arch opening. Buff-brick voussoirs and (cut-back) hood-mouldings drop at upper jambs, stepping inwards below springer height. At RH side, 2/2 window has ashlar sill, with arch etc. as described. To LH side, bay window has 1/1 windows (behind metal storms) in each face, with ashlar sills over decorative, buff-brick panels in each face, and with buff-brick, segmental window-heads as elsewhere. Soffits are aluminum-clad, and roof has brown asphalt shingles. Rebuilt chimney at south wall has original, buff-brick base, but is without ornamentation. A hip-roofed addition exists to the south, clad in finely spaced clapboard and with period, wooden storm windows over 1/1 windows having taller bottom sashes. An unsuitable metal canopy conceals the window-heads.

North Elevation – Side elevation comprises hipped-roof front pavilion, and two, pitched-roof extensions to west, first of which appears contemporary with front. Stone foundation, buff-brick plinth, pilasters and trim are as described. At LH side, entry to house is by flight of concrete stairs to landing with modern, turned, wooden railings, sheltered by plain, hip-roofed porch supported by thin, turned posts. Entry aperture is presumed to be an altered window aperture. To right, bay window is similar to front bay window, but with narrow, 1/1 windows in each face (again with metal storms). First pitched-roof extension to west has similar brick details, and 1/1 wood window (with metal storm) at left, and 1/1 aluminum replacement to right, both with ashlar sills. Lower, pitched-roof addition further to west has similar masonry elements, but proportion of windows, and window-head trim, suggest this is a more recent construction. Soffits and roof are clad as at front, and at junction of front pavilion and first wing, another, rebuilt, red-brick chimney rises from an older buff-brick base.