North Elevation – House is built off exposed local, rubble foundation, with brick plinth containing double, bevelled courses. Façade has projecting brick vestibule at LH side, with pair of half-glazed, panelled front doors, and etched-glass transom window, with flat, brick arch above. Buff brick voussoirs and flush hood moulding drop at upper jambs to (painted) band course. Vestibule has plain frieze and soffit boards, with hipped roof above. Second floor above is clad in wood siding, and with large, aluminum casement windows (with false muntins). Gable retains period features of central, half-timbered lunette within wall clad in horizontal boards with wooden discs at corners. Coffered frieze follows pitch of roof, which is supported by brackets at front and sides. Soffits are finished with beaded-boards and fascia is plain. At RH side, ground floor, brick, bay window has cast-stone sills and flat, brick arches as described. Frieze board and soffits are as at front door, with hipped roof above. At second floor is another pair of large, replacement, aluminum casements (with false muntins), again with cast-stone sill and flat, brick arch, and with metal shutters. Beaded soffit boards are supported by lone, profiled and punctured bracket at corner of building. Hipped roof above contains central, pitch-roofed dormer, with cheeks clad in painted shingles and having square aluminum window (with the usual false muntins) within metal casings. Recessed pediment above is framed by shingle-mouldings which return to extend also along eaves at either side. Peak of roof has prominent gable with blind, wooden, fan-type motif within horizontally boarded wall, and with wooden discs at corners. Roofs are clad in brown asphalt shingles, and a tall, buff-brick chimney, with broader, red-brick base and two upper bands of corbelled bricks, exists at west wall. An extensive, recently built, sun-room with divided-light aluminum windows as elsewhere, extends from west side of house

West Elevation – At west elevation, much of LH side of brick house is hidden by large, one-story sunroom built off rendered concrete base. Fenestration is of large, divided-light casements throughout, with three-pane transom windows above each unit. Bevelled corners are glazed, while two central bays have large, framed plywood panels. Stocky balustrade has panelled newels over ground-floor pilasters, with robust profiled handrail spanning between and sturdy, widely spaced pickets below. Brick wall above contains yet another new window, with metal shutters. (Chimney-breast to right supports stack as already described.) At RH side, projecting, two-storey, gabled bay has typical new aluminum windows in each face, with sills and arches as described. At gable, soffits are clad in beaded-boards. These are supported by simple, curved braces at bay window, and by typical, profiled and punctured brackets elsewhere. Small gable rises from modest hipped roof over bay, above which is wood-clad gable with a rectangular window crudely inserted into a former lunette. Soffits are again beaded, and fascias have minor, recent, bargeboard both at peak and eaves. 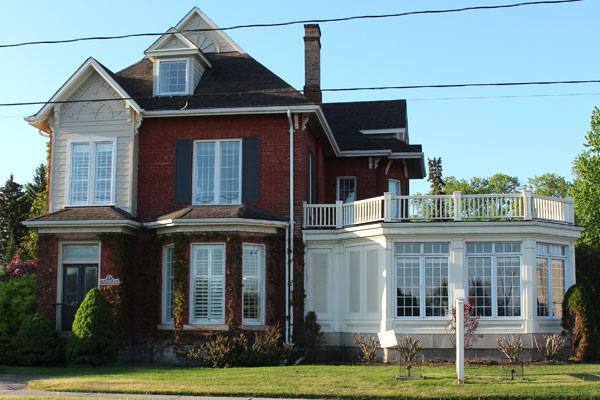