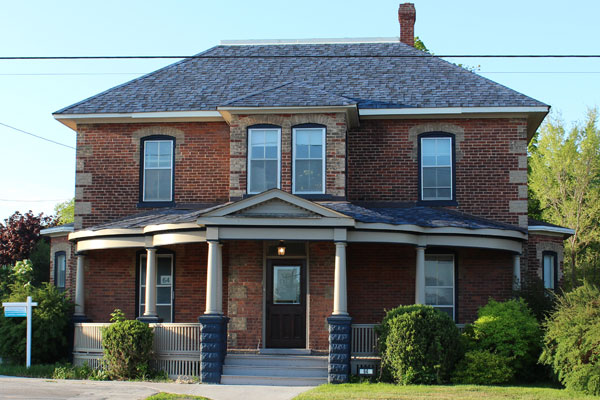 Description – Front verandah, with multiple, bow-fronted sections, is most striking feature of house. Existing verandah replaces original verandahs at either side of projecting central brick bay (note anomalous side doors to vestibule, and paint witnesses on brickwork). Columns are built off (painted) cast-stone copings over cast-stone blocks of piers below. Beams have upper dentils throughout, and unusual, triple-beaded ceiling within. Projecting, pedimented, central entry, with paired columns, has similar dentilled treatment in pediment. Curved, profiled handrails span between piers, with traditional pickets framed into profiled bottom rail. Masonry is of hand-made red brick, with buff-brick quoins, separated by band of red brick, at all corners including central, square bay. Entry has half-glazed and panelled door, with leaded-light transom window in segmental arch above. Segmental-arch voussoirs are of buff-brick throughout, with unusual, decorative lobes at jambs, while sills are painted ashlar. Apertures in either side of vestibule retain half-glazed, two-panel doors, while front windows are 2/2 (with metal storms). At east and west walls, red-brick, bay windows have buff-brick trim framing 1/1 windows, narrower at sides than in central bay. At second floor, windows, including sills, heads and upper jambs, are similar to ground floor, but smaller. Windows at central bay are paired, with red-brick pier between, while windows in both sides of bay, and at front elevation are typical 2/2 (with metal storms). Soffits of beaded boards have moulding adjacent masonry, and fascias are plain. Front bay is topped with small, hipped roof, while main hipped roof rises to central flat roof edged with galvanized flashing. A single chimney, with corbelling at head, rises to west of central flat, and beyond. 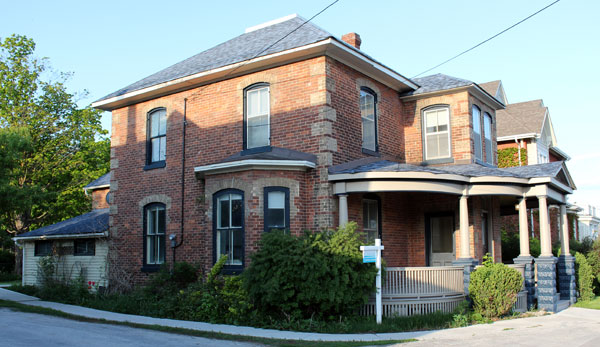