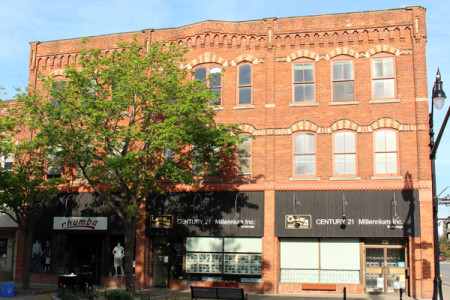 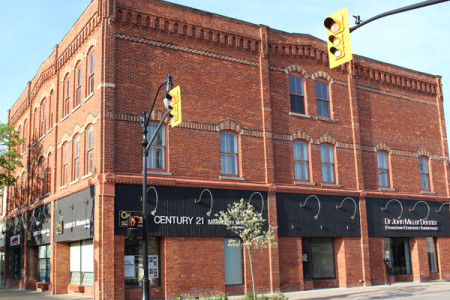 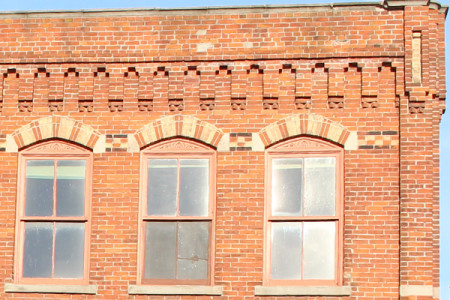 Second Floor – Original 2/1 windows remain, with inner, secondary glazing at all units. Sills are limestone while segmental-arch apertures are polychrome in red and buff brick, with outer band of black bricks forming pointed arches above. Stone springers extend into red and buff, soldier-brick band-course, framed by black-brick stretchers which extends across east (and north) elevations, including through pilasters. Central windows are paired, 1/1 within wider bay, and with decorative wooden mullion between and wooden filigree in spandrel above.

Third Floor – Top floor is much as second floor, again with original 2/2 windows throughout. At this level, window arches are pointed instead, while upper sashes have square heads at LH and RH units, with filigree spandrels above. At central unit, sashes instead have pointed top-rails, with filigree at central pair only. Black bricks frame band-course only, which at this level does not extend through pilasters.

North Elevation – Elevation facing Second Street has three unequal bays with elements as at main façade, but without shop-fronts at ground floor and with fewer windows.

Second Floor – Original 2/2 windows having curved top rails again remain, also with inner, secondary glazing. Fenestration consists of two windows per bay, more closely spaced in narrower central bay. All other aspects are as at this level in main façade.

Third Floor – Top floor is, again, much as same floor at front façade, though with two original windows at central bay only, while remainder at this level is without windows.

Parapet – Parapet and machicolation are as at front, with small, brick gable at centre. There is much evidence of repointing and again, ill-fitting coping suggests rebuilt elements: indeed, RH pilaster piers and stone coping have evidently been altered, and to their disadvantage.

Comments – A fabulous building, with rich ornament in both masonry and wooden elements. Recent shop-fronts are not unacceptable, though signage should be raised and harmonized. Parapet seems to have been rebuilt without recessed crosses and without upper, corbelled courses to accommodate stone copings. Similarly, front pediment seems oddly small. Investigation should confirm original conditions, which might be reinstated. Parapet needs pointing and some brick repair; and rear brickwork should be inspected for failed joints and masonry. Other needed repairs are: RH bay, second floor, LH window – failed voussoirs; LH bay, second floor, RH and LH windows – repoint above; LH bay, third floor, RH window – repoint vouissoirs.