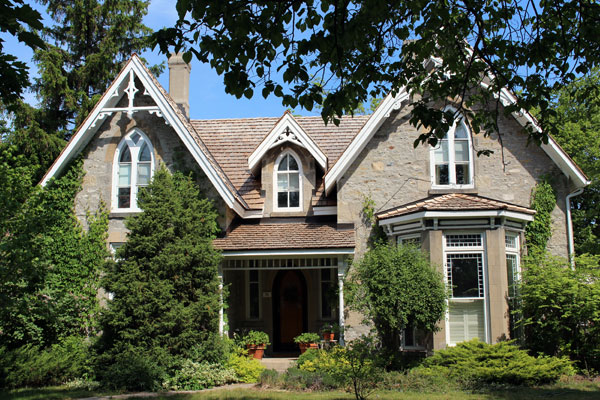 South Elevation – Entrance is recessed between projecting, gabled wings, under small, lean-to roof. Pointed-arch contains slab door with applied vertical battens, between tall 1/1 side-lights with patterned glass (behind two-pane storms). Porch has four slender, turned posts rising to wide brackets at eaves, with fine vertical spindles in frames spanning between. At RH side, ground-floor bay window has piers of incised, cementitious render, rising from low stone sills to wooden fascia, with pair of small wooden brackets at corners of bay, with small, wooden panels between. Bay window fenestration at three sides consists of large, sash-and-case units with single-pane, bottom sashes, and upper sashes with small, square, coloured panes around large central pane (behind three-pane storms). Shallow transom windows also have coloured, square, peripheral panes and long, central pane (behind wooden storms). Windows at LH wing, ground floor are similar, including transom, with rendered lintel, broached ashlar quoins and droved ashlar sill. Second-floor fenestration is pointed-arch throughout. At gables, each arch contains two, three-pane lancets with additional, upper pane over bifurcated wooden mullion (behind similar wooden storms). Jambs and sill are ashlar masonry as described, and voussoirs are cement-rendered. Window at gabled, central dormer consists of six-pane inner and six-pane storm sashes. Gables have bargeboards comprised of varied, ornamented trusses. LH gable has King-post truss with large trefoils at either side, whereas dormer and RH gable have scissor-trusses with trefoils either side and quatrefoil above. Main trusses also have cusped braces and fine central finials below. Soffits are finished with beaded boards, fascias have simple shingle-moulding, and roofs are all clad in wooden shingles, with face-nailed metal at valleys and ridge-rolls. Two large, rendered, brick chimneys, set well back on ridges, have (concealed) upper and lower corbelled bands. 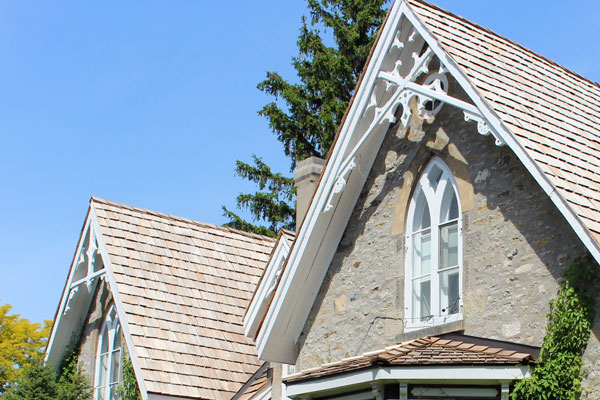 East Elevation – Elevation to Elgin Street consists of tall, broached-ashlar quoins at either side, framing wall of random rubble, with remnants of incised render remaining at upper levels. Elevation is symmetrical, with blind recess at left and doorway at right, both with large quoins and rendered lintels. Incised render remains also at niche, with joints aligned with adjacent quoins. Doorway has replacement slab-type door under coloured-glass transom window as at front. Small peaked canopy above is built of simple wooden struts at either side. Roof consists of large pitch only. Flat-roofed, one-storey addition is set back to north. 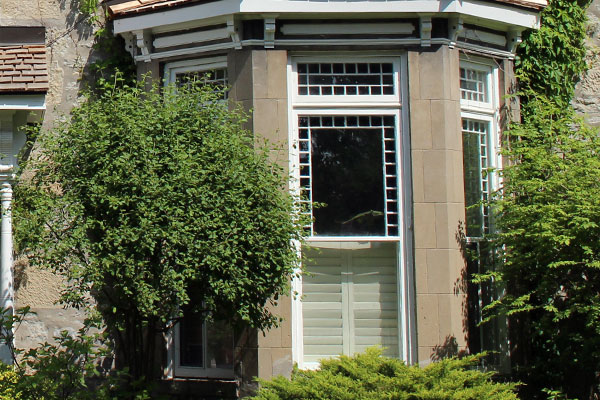 West Elevation – Elevation to Sainte Marie Street has typical central Gothic gable at upper level, with flat bargeboards having undulations and half-circles at lower edge. Masonry treatments throughout are as described previously. Ground-floor windows are as elsewhere, with single-pane bottom sashes, multiple pane top sashes, and decorative transom windows above (with typical wooden storms also). A tall, narrow, 1/1 window is centred within wall at ground-floor level, below six-pane inner sash (and similar storm) within pointed arch at second-floor gable. Roof pitches above are wood-shingled, as elsewhere. 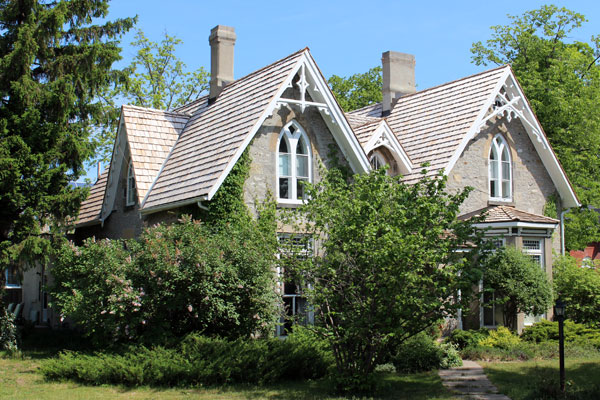 North Elevation – Rear elevation is continuation of south gables, with masonry as elsewhere, 2/2 ground floor windows, and six-pane windows (and storms) within pointed arches at upper floor gables. Decorative trusses at peak are same as at south elevation. One storey, rendered, flat-roofed addition across north elevation is not intrusive, leaving more interesting, original aspects of rear of house exposed to view.